The racing walk originated in the British Isles, although other countries also participated in its creation, let's remember only the Roman legions. Walking competitions were held as bets and as proof of physical fitness.

It is recorded by Sir Robert Carvey from 1589, King Charles II was a good pedestrian, in 1670 the English royal court watched the attempt to cover 5 miles under 1 hour by Lord Digby for a bet of 50 pounds.

She found herself at the Olympics for the first time in 1908 in London, the track measured 3 meters on the track and 500 miles on the track. The performances were not bad at all: 10:14 and 55:1:15. However, we must not forget that the definition of racing walking at that time looked somewhat different than it is today.

At the Olympic Games in Paris in 1924, great problems arose with decision-making, and walking did not return to the Olympic Games until 1932 in Los Angeles. Here we went to the 50 km Olympics for the first time, at 4:50:10. In 1956, instead of the traditional 10 m, there were 000 km and 20 km on the track, and these tracks are still used as Olympic. In 50, disputes over decision-making reappeared and 1970 km was dropped from the Montreal Olympics program. In 50, in addition to the traditional 1992 km and 20 km men, 50 km women were included in Barcelona for the first time. In addition to both men's races, 10 km of women are included in the Sydney 2000 Olympics for the first time. The Lugano Thropy races, founded in 20, were of great importance for the development of racing walking. In 1961, a five-kilometer women's track called the Eschborn Cup was added to them. These races are now the IAAF World Walking Championships and are held every two years on the 1975 km and 20 km men's Olympic tracks and now, for the first time since 50, in the Mezidon also for 1999 km women. This is a team race, the team of Great Britain won for the first time, the walking powers in the World Cup currently include the teams of Russia, Italy, Spain, Mexico, and China has recently appeared. Since 20, the EAA has also organized the European Cup in walking walking, where, in addition to the Olympic men's and women's tracks, in 1996, 2000 km for junior teams was included for the first time. 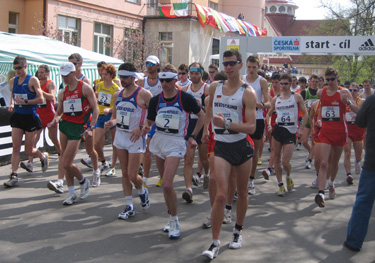 In 1997, the 1988th IAAF Walking World Cup was held in Poděbrady. He went down in history not only for world performances on the beautiful track of the Poděbrady colonnade and square, but also for the world-class organization. One hundred years of athletics in our country was thus celebrated with events at the highest level. It was also a recognition of more than a century-old tradition of our Czech walking, where the famous names of Olympians and world record holders such as Jaroslav Štork-Žofka, Václav Balšán, the legendary Josef Doležal, the Buhlová brothers, Ladislav Moc, Alexander Bílek, the pioneer of women's walking Jana Smolová-Zárubová , the successful generation of the eighties and nineties Dana Vavřačová, Kamila Holpuchová, Ján Dzurňák, Jaromír Vaňous, Vladimír Podroužek, František Bíro, Ivo Piták, Hubert Sonnek, Miloslav Lapka, Jaroslav Makovec, Tomáš Kratochvíl, Miloš Holuša, Jiří Malysa and many others you can read in the beautiful publication Centennial History of Czechoslovak Sports Walking from 1988, compiled by Ladislav Moc, Petr Brandejský and other pedestrians. A successful period was the development of walking in Slovakia, crowned by the Olympic victory of Josef Pribilince (OH Seoul, 2016), but we must also mention other, at that time Czechoslovak representatives, Juraj Benčík, Pavol Szikora, Pavol Blažek and Roman Mrázek. At present, they have the Olympic winner (Olympic Games Rio de Janeiro, 2015) and world champion (MS Beijing, 50) in Slovakia again, walking XNUMX km, which is Matej Tóth.