This year, the Prague Walking Clock and Half-Hour Relay Pairs are combined into one big two-day walking holiday on October 16-17, 2021, organized jointly by SMOLA CHŮZE and AC RUMBURK at the athletic stadium in RUMBURG !!!!!

Date of appointment - Notation m in this "postcovid" year, we have entered, THE PRAGUE 1 STAND TRAIN AND 30 MINUTES PAIR TOGETHER TO THE ORGANIC STATION IN ROMANIA !!! ALS ZWEI TAGE GEHENSPORTFEST and als Ende der Gehensaison 2021!!! Allen Geher and Geherinnen laden are right. 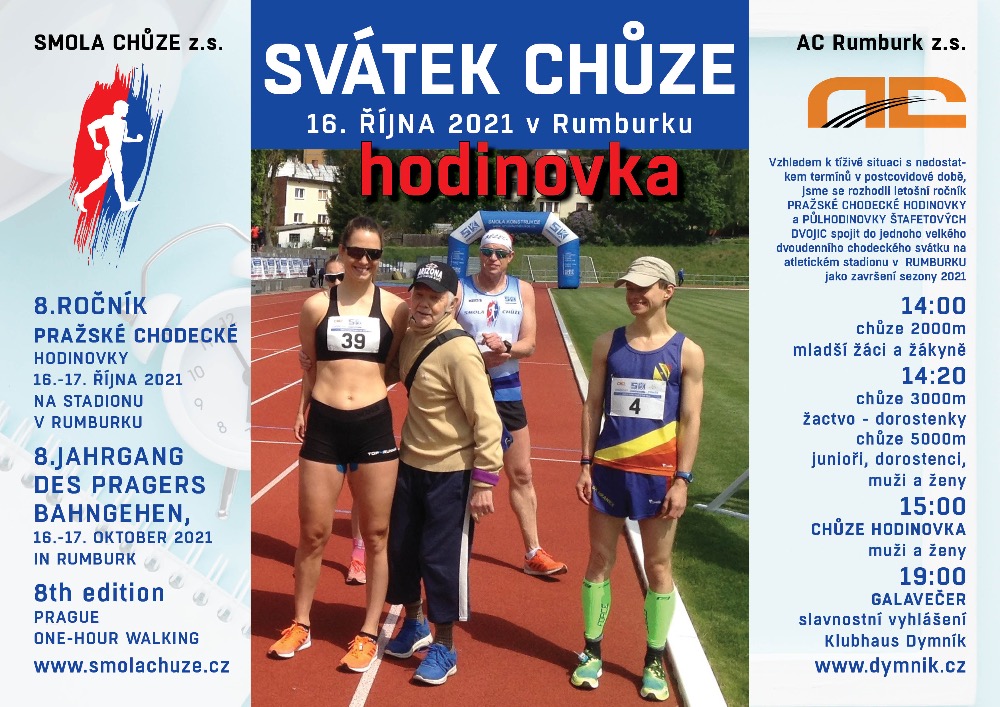 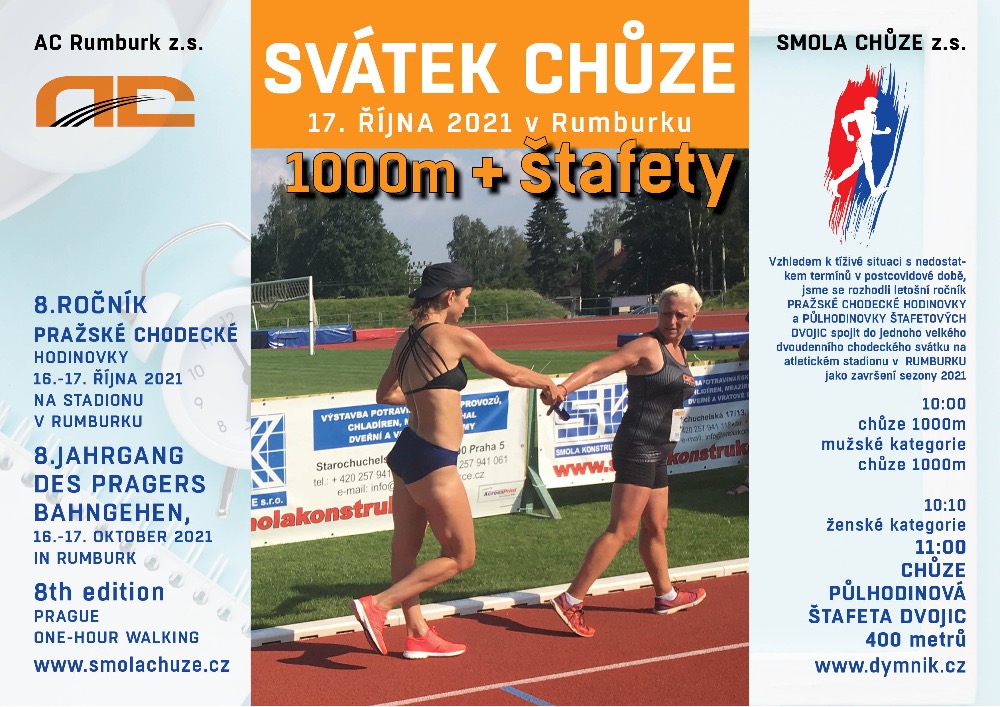 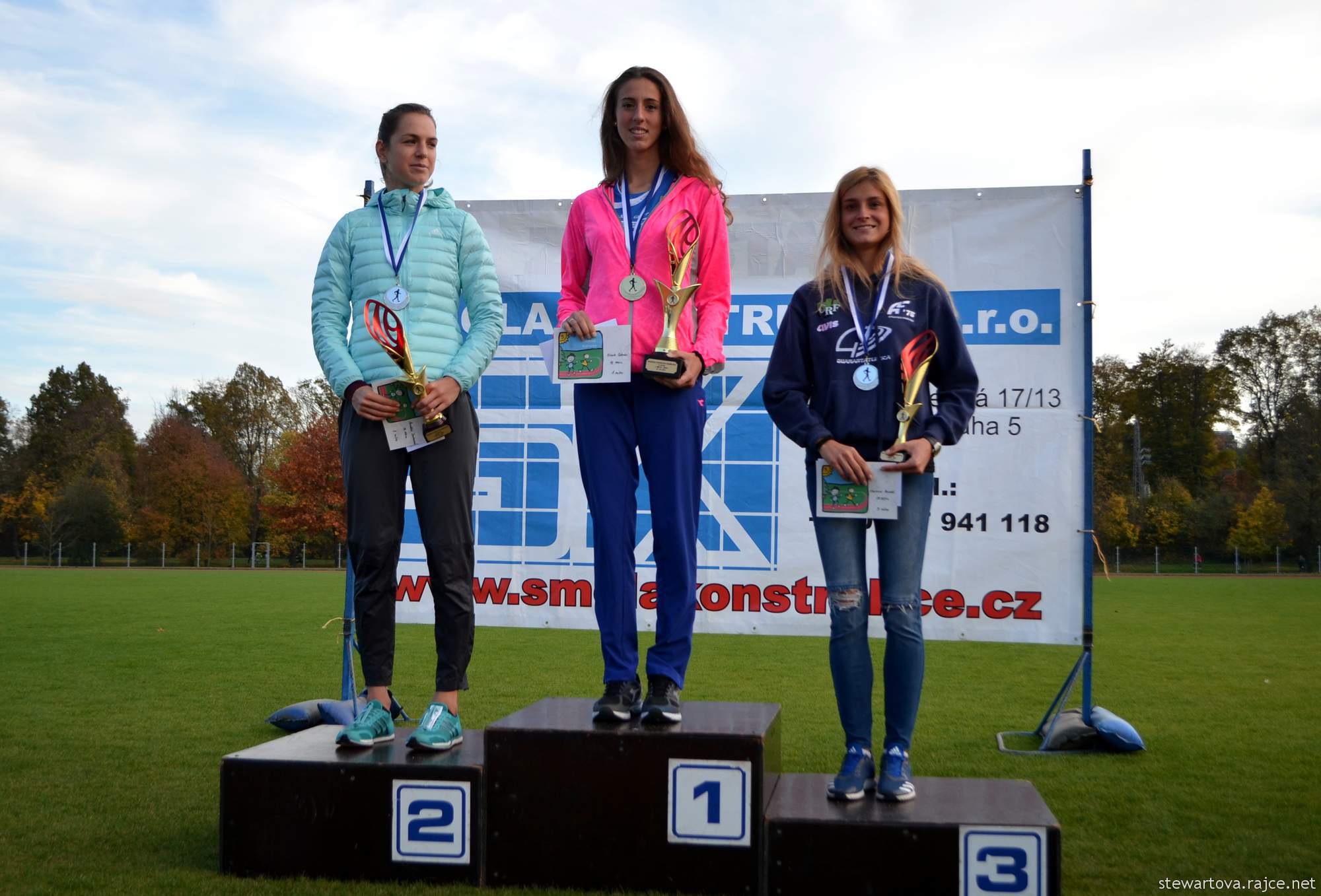 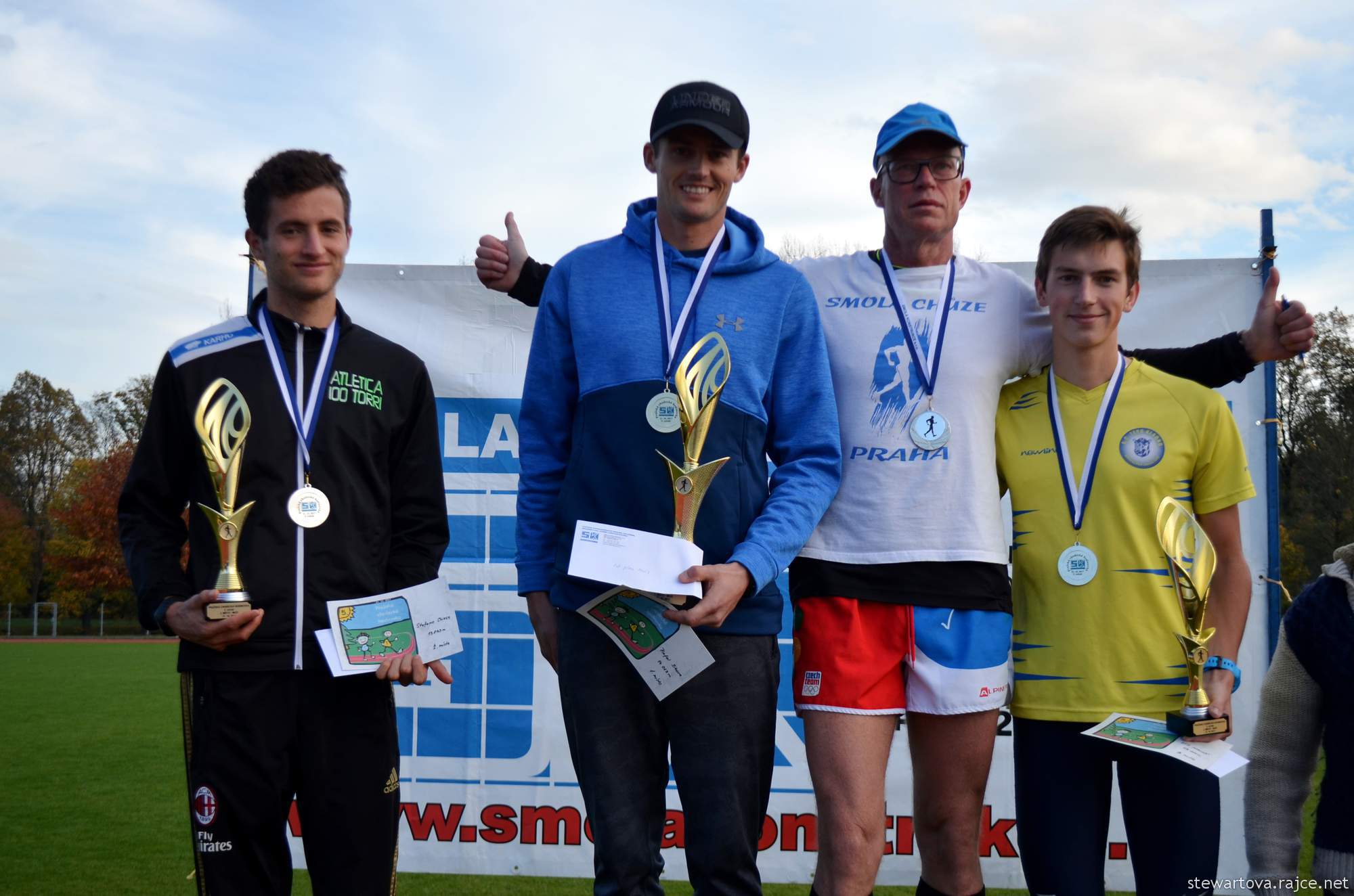 VÍT HLAVÁČ 13.300m ANDREA KOVACS 11.310m celebrates the premiere victory at the Prague Walking Watch. MILOSLAV LAPKA reached an incredible 62m at the age of 12.123! This is for most of his science fiction years! Excellent performances of 16-year-old JARDY MORÁVKA 12.188m and 17-year-old ELIŠKA MARTÍNKOVÁ 11.234m

The wonderful, almost summer weather attracted not only a very large field of competitors, but also their companions and spectators to Stromovka for the 7th Prague Walking Watch. And there was something to look at especially in the main race. 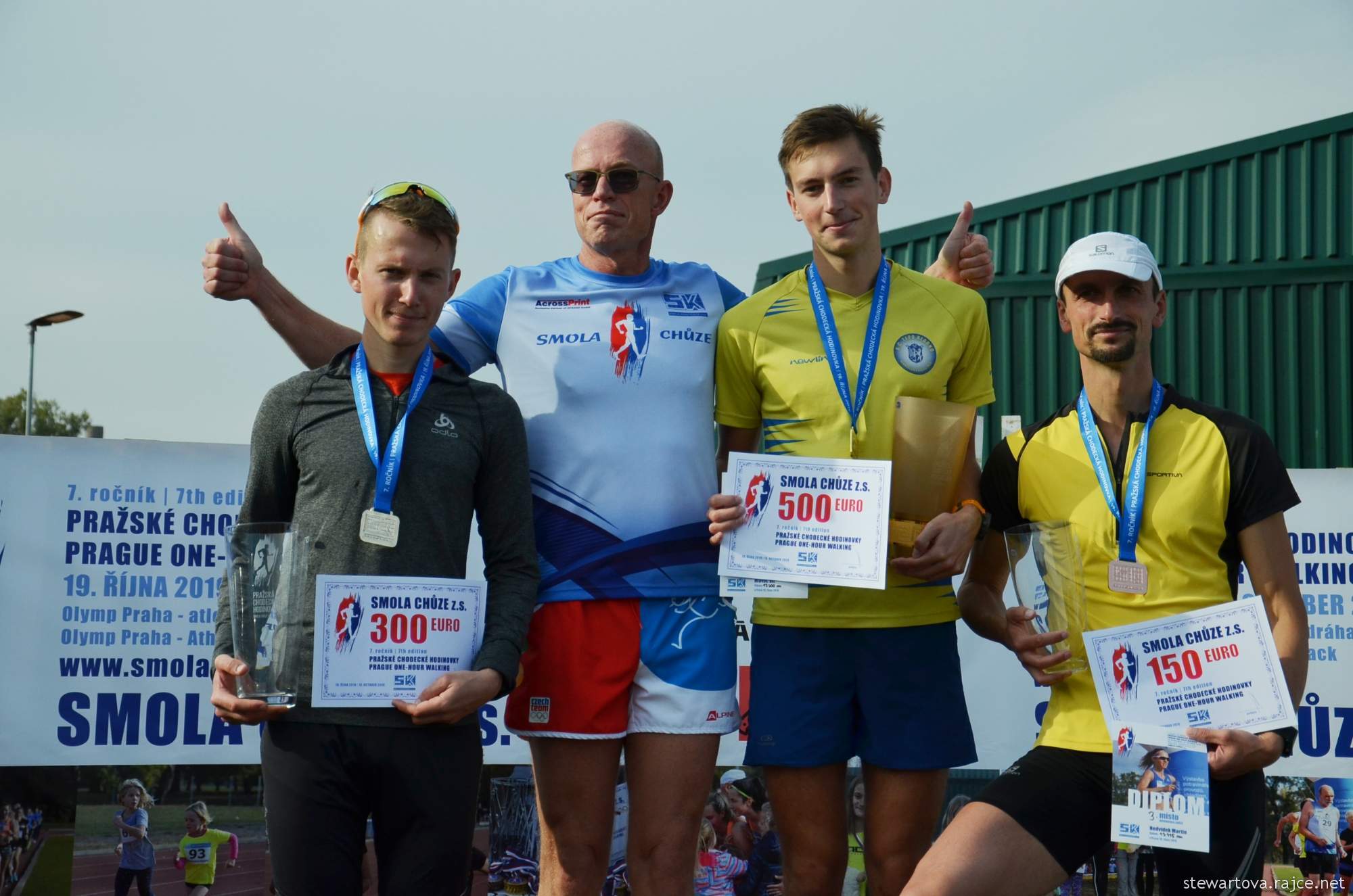 A "strong trio" formed in the men immediately after the start Hlaváč, Gdula, Nedvídekwhich kept a fairly brisk pace around 4: 30 / km. Martin Nedvídek maintained this pace for 11 laps (4.400 m), then he started to lag a little behind the leading pair Hlaváč, Gdula, who fought together until the tenth kilometer Hlaváč (45:17), Gdula (45:18). Then, however Hthe breaker tore off to win for a clear premiere victory in 13m (in 2017 he went here 13 114m and was bronze) and for a check for 500 EURO. However, a big battle between Nedvídek and Gdula started for the second place. Veteran Martin Nedvídek is a fighter to look at, it is known about him, but what he showed here was fantastic, he almost caught up with Lukáš Gdul for only 7 seconds, but 16 years younger Lukáš After all, Gdula recovered at the very end and defended the second place by only 14 m before Martin Nedvídek with a performance of 13 m.

Race hero Martin Nedvídek is incredibly improving and the older he gets the better, as he reached 13m !!! (here he walked 12m in 700 and 2018m in 12 on the watch). Other competitors in the order lagged behind the leading trio Hlaváč, Gdula, Nedvídek by almost 262km!

He became another hero of the race and the absolute winner according to the achieved performance due to age Miloslav Lapka (born 1957), who ran 62m at the age of 12 for 1 hour. Friends this is for most of his age a sci-fi performance !!! Fantastic. But it was not free. Cakes are not without work, even for young people, let alone for veterans. I will reveal that Míla was specially preparing for this race and trained hard 6 times a week ..... !! Huge respect !!! And my chin dropped completely from this performance ..... A huge CONGRATULATIONS and HAVE !!!

Furthermore, it is necessary to highly pick up and highly evaluate the performance of the fifth overall in the order of only 16 years of very talented and hardworking Jardy Morávka, who ran 12 188m and 10km in 49: 06min, which earned him a transfer to PITCH WALKING PRAGUE !!! 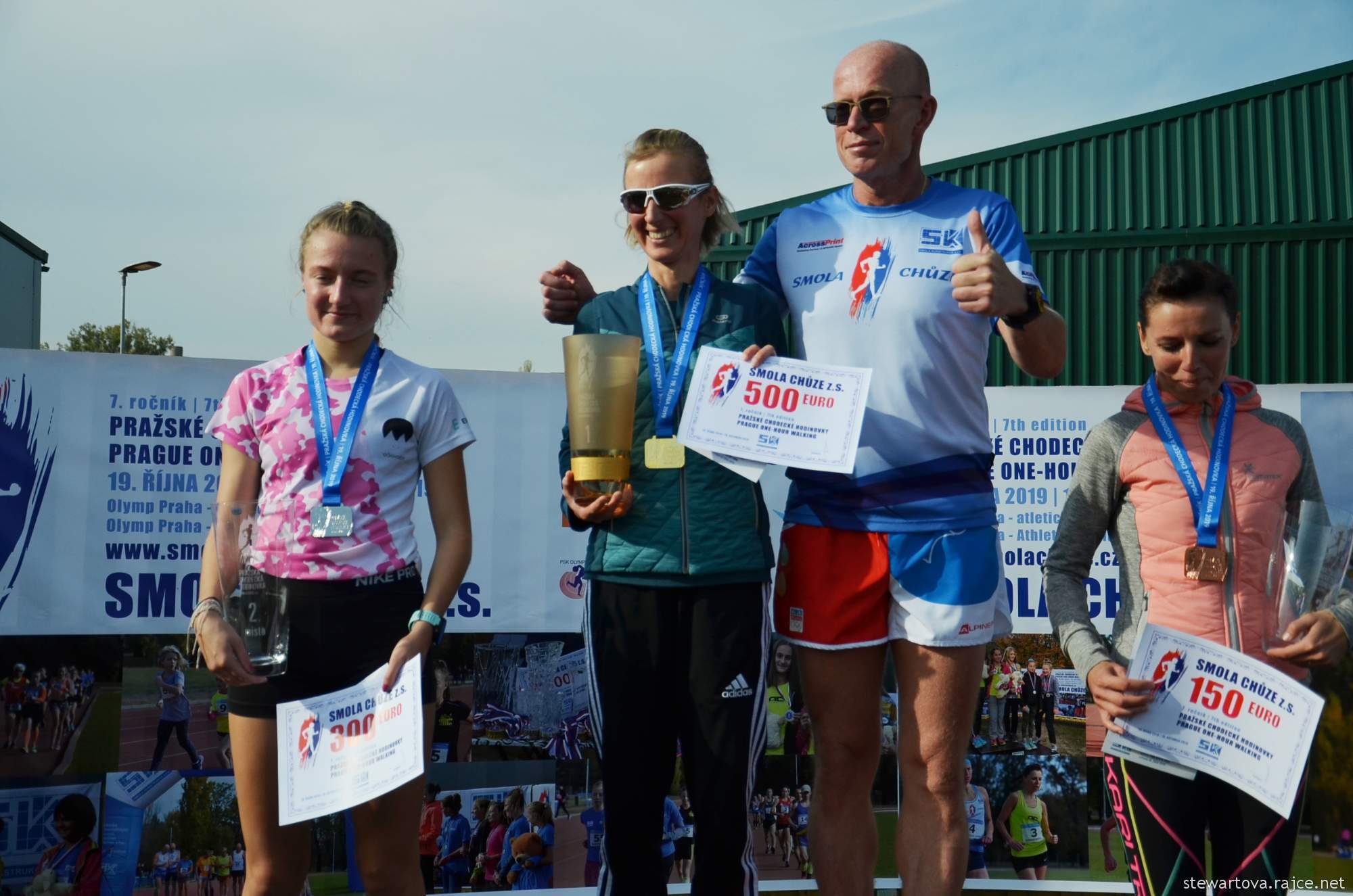 In the women's race in the absence of Anežka Drahotová, who apologized for the race, due to the fact that she is currently preparing for the first foreign training camp towards the Olympic Games in Tokyo, sorry in Sapporo !!!, for the first time and the Hungarian national team living in Linz, Austria Andrea Kovacs 11 310m clearly won. Andrea is currently preparing for the World Cup of Walking Teams (2-3 May 2020, in Minsk), where she will represent Hungary at 50km !!! Maybe the fifty with 500 EUR in the pocket from Stromovka will be "stepped on" nicely ...... We are holding the place anyway!

A big and very pleasant surprise is the performance of the second only 17-year-old Elišky Martínková 11mwhich was the only one able to compete with the winner. For Eliška it is a wonderful performance and the result is 10km in 53: 40min and 11m in 234 hour !!! CONGRATULATIONS !!! And so on !!!

Naďa Dušková 10 791m (last year 10 630m) defended her third place last yearbut it gave her significantly more work than last year since fourth in order Lenka Borovičková 10 746m her this time she drove a lot and was only 45 meters behind her!

Of the youth categories, the performance of a younger student deserves the most attentiondéla Veselková (2006) 9: 40,2min at 2m and as an addition, Adélka took another 000m in the inserted race for a half-hour of pupils !!! So he deserves great admiration for that !! It is possible that this is the future successor of Anežka Drahotová .......

RESULTS ACCORDING TO THE EUROPA CHALLENGE SCORING TABLE