ANEŽKA DRAHOTOVÁ 12.740m and LUKÁŠ GDULA 13.150m fulfilled the roles of favorites without any problems at the Prague Walking Watch and they clearly won !!! PETR DUŠEK (year 5) won in the new 2001km juniors in a new personal record of 23: 37,7min! 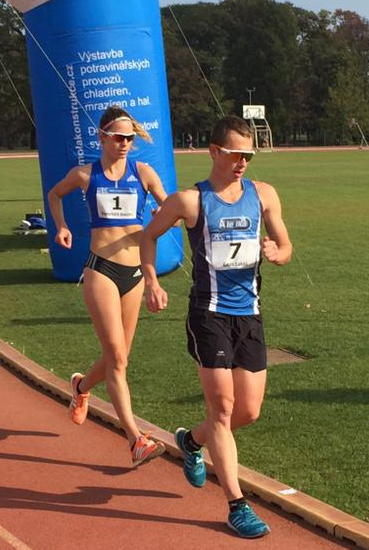 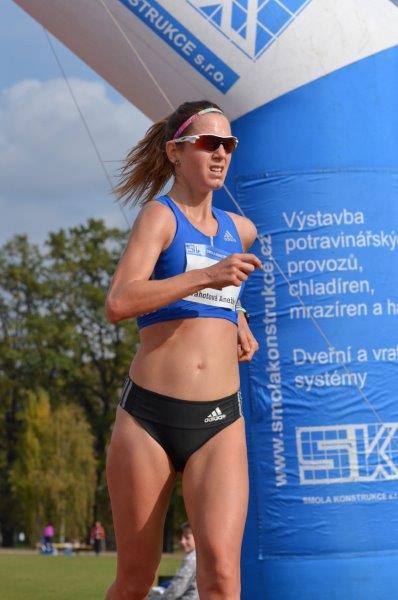 Prague watch 2018 won: Lukáš Gdula(7) for 13 150m in men and Anežka Drahotová(1) for 12m in women (see photo). There was no doubt about the winners from the very beginning. However, a hard fight was fought for the second place in the men between Martin Nedvídek, Rostislav Kolář and the younger brother of Lukáš Gdula Tomáš. Rosťa and Tomáš tried to "hang" their much older opponent Martin as much as possible and they did very well within the eighth kilometer, but here Tomáš Gdula dropped out of the fight for the first three places and shortly after that he managed to get Rosť a few tens of meters in front of Martin in second place. However, he could not resist Martin's final crushing finish. And so he finally won 2nd place Martin Nedvidek M43 (8) for 12 700m, 3rd place Rostislav Kolar(14) for 12 639m and took the unpopular 4th place Tomas Gdula(9)for 12 350m. The best German racer Steffen Borch (13), M45, SV Halle, narrowly conquered the magical 12 km border - 12 and finished in 070th place. The overall 5th place was seduced by a very balanced mini-fight "at a distance", two big rivals M6 from the veteran World Championships, ME - Pepa Smol  11 286m subdued 55 meters of his German juice Steffen Meyer, NE Breitenbrunn, 11 231m.

Co-founder of this race Mirek Fliegl The M60, PSK Olymp Praha, enjoyed the race for a very good 10 m, and thus defeated both Poles by about 460 meters, who finished behind it in 100th place.  Miroslaw Luniewski, M60, 10 368m and in 11th place Zbigniew Kwita M55, 10 332. The third of the German competitors Dick Gnauck The M55, ASV Erfurt, was certainly happy to conquer the magical ten-kilometer border by a full 24 meters at 10 meters. And then it came - a heavy duel that about Peter Adam M65, PITCH WALK Prague, did not expect at all, but Vladimir Kansky M75, Spartak Prague 4, does not happen to be a multiple World, European Champion and especially a master of his craft, just consider it 78 meters in an hour in the 9s !!!! However, Petr Adam proved what he is very well known for, he is a racer and he can squeeze even if he can't at all and he pressed it to 451 meters and beat Vladimír by a whole 9 meter. We don't know if he apologized to him, but as I know Peter, he certainly did! Another of our German friends Horst Kiepert M65, MBB Augsburg, then also managed in 1 hour over 9km - 9 111 meters. Further ranking can be found below in the link to the overall results. 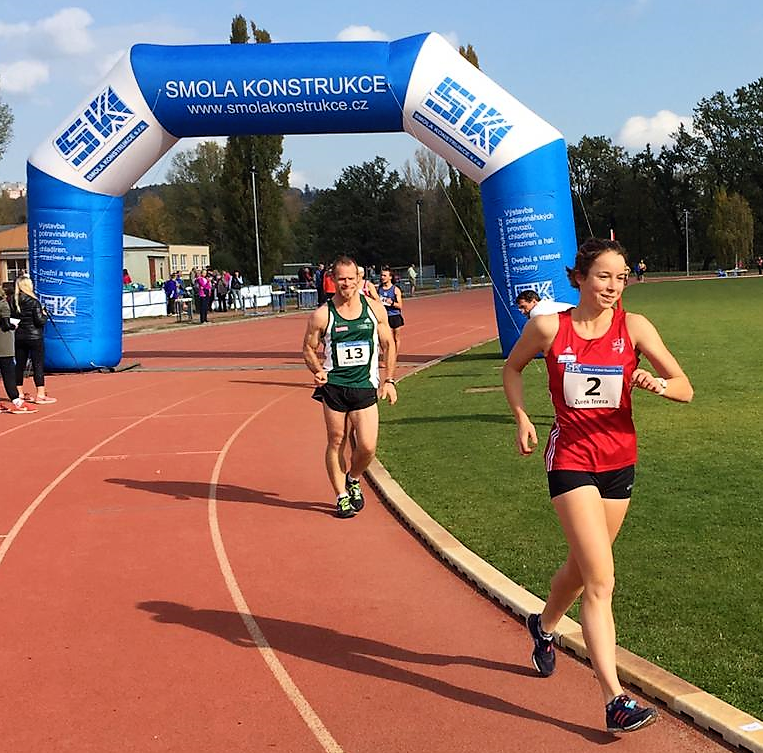 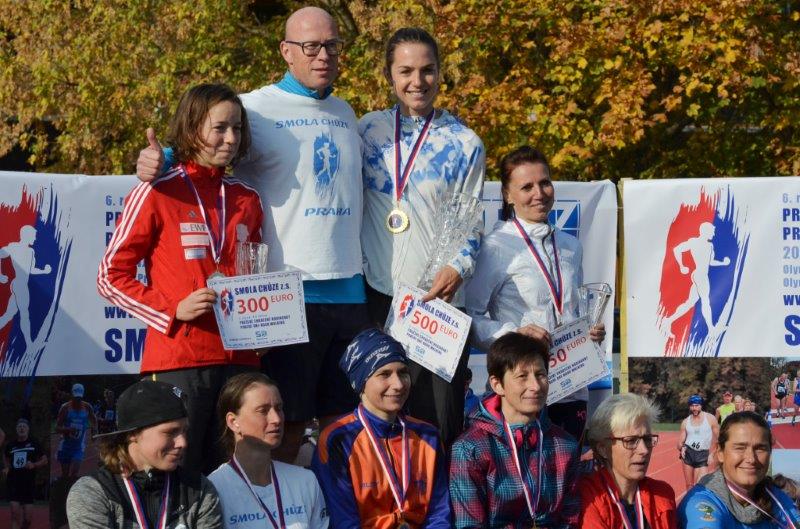 In the women's race, it was clear in advance that Teresa Zurek could hardly be endangered Anežka Drahotová (1) and so Anežka won the solo race for a clear victory in 12 m, not for a steamer but for many, many steamers before Teresa Zurek(2) 11m from Germany, which just did not cross the 960km border. The expected battle for third place between Lenka Borovičková and Naděžda Dušková took place around 12 kilometers. Unfortunately, this time Lenka bravely fought not only with her opponent but also with the overall weakening of the organism (virus, rhinitis) and so she won 3,5rd place for 3 m for herself. Nadezda Dušková, AC Rumburk. Lenka Borovičková, PITCH WALK Prague, in 4th place she then ran 10 337m. And the granddaughter of Vladimír Kánský Petra Jeníková, Spartak Prague 4, 10 158m a Martina Netolicka, AC Slovan Liberec, 10 109m got over the magical ten-kilometer border!

In the framework races, the youth representative again drew great attention to himself Petr Dusek from AC Rumburk by improving the current personal maximum on the track 5.000m walk on the track already excellent 23: 37,7min !!! Congratulations !!!

Very pleasing and motivating for the organizers and at the same time binding is the high participation in the children's and youth categories, especially from AC Rumburk, Spartak Vrchlabí, Prague Sokol Vinohrady, Orel Vyškov and Sokol Jaroměř !!

They participated in the race as part of the inclusion of i Handicapped pedestrians from the Edith Tust group from Leipzig / Würzburg, Germany. 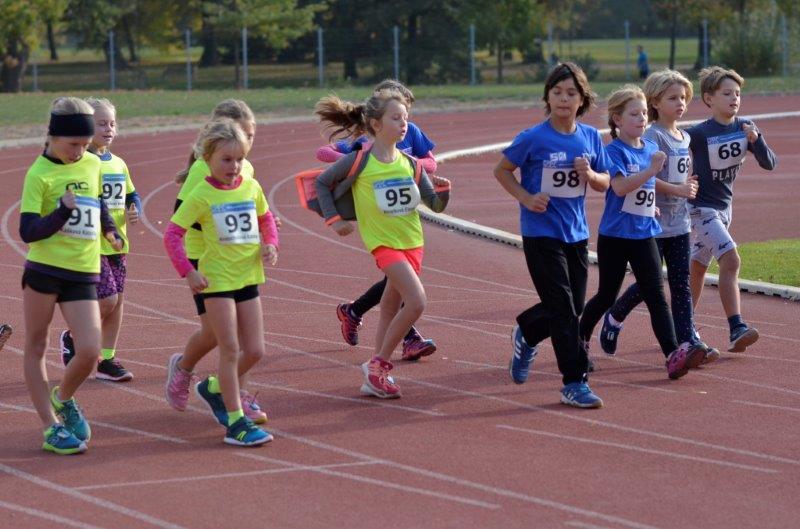 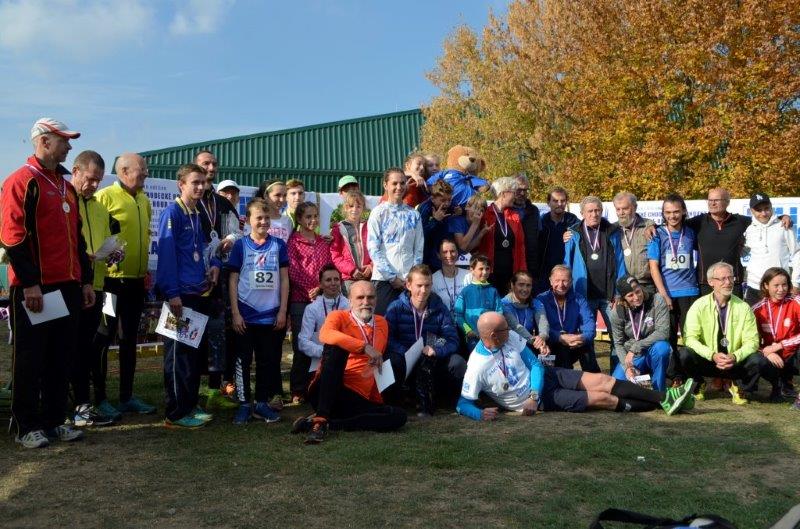