German pedestrians under the baton of Ronald Weigel met the sharp limits for the Olympic Games in Sapporo / Tokyo at the German World Championships in Frankfurt. Above all stands the 50km performance of Jonathan Hilbert 3:43:44, who ranked among the world's top in this performance and is even the fastest in the world in this discipline this year! 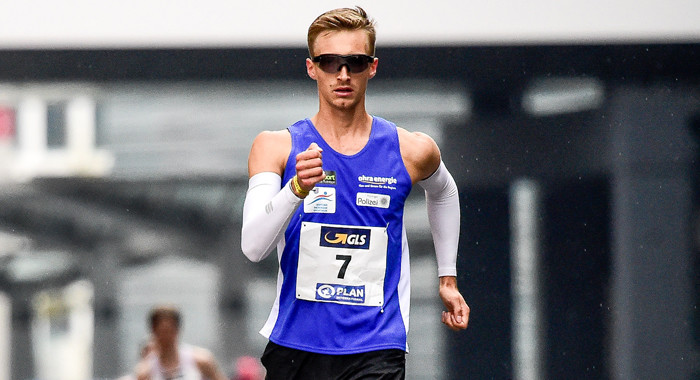 50km walk race - The German Championship in Frankfurt brought the Germans even three Olympic limiters! Of all the most, the performance of Jonathan Hilbert 3:43:44, which, with this huge improvement, also moved to the sixth place in the historical tables of Germany in this discipline!

The men's Nils Brembach and the Saskia Feige women dominated the 20km walk, who also took an important step on the way to Tokyo (Sappora) with their convincing performances.

"It was great. Really delicious. Such performance improvements. It was a great race. We can be really proud of all the athletes and coaches ". he let himself be heard very clearly euphorically German coach German walker Ronald Weigel, after pedestrians crossed the finish line at the Frankfurt trade fair premises last Saturday.

Protruding were three met limits at the Olympics, crowned by the excellent time of Jonathan Hilbert (LG Ohra Energie) at 50km. Thuringian Hilbert set the pace from the very beginning of the race and very quickly disengaged from his two rivals - while still having enough strength in the second half of the race to accelerate the pace. Result Master title - Champion of Germany in 3:43:44. Only five Germans were faster in a 50km walk in the entire history of this discipline. This year it is even the fastest 50km in the world! and overall 13th place in the world historical tables.

"I expected to meet the OH limit," the 25-year-old man said. "But the fact that I'll be so good on the last kilometer, I have no idea where I got it!" The weather conditions also suited him. "I like rain and cold weather," he confirmed. It has been a goal I have been preparing for for the last six or seven years. "

Concentrated performance also Seiler and Dohmann on a 50km walk

After almost 4 hours of ragging, Nathaniel Seiler (TV Bühlertal) and Carl Dohmann (SCL Heel Baden-Baden) were also able to celebrate after four hours. Both fighters from Baden also met the sharp OH limit (3:50 h) with excellent cooperation and division of forces. For 3:48:44 resp. 3:48:54 hours the craft was fulfilled - thus both met not only the sharp OH limit, but also surpassed the performance of Karl Junghannße (Top Team Thüringen), from the October Dudince (3:49:45 h). "Both came in a disciplined and timely manner," said Ron Weigel.

From the beginning, the four German candidates of the Olympics went side by side on the first 2km circuits of the 20km race. But then Nils Brembach (SC Potsdam) and young Leo Köpp (LG Nord Berlin) picked up the pace and broke away from their rivals Christopher Linke and Hagen Pohle (beide SC Potsdam). As in 2015 and 2019, Nils Brembach was at their best. The 28-year-old, fifth from the 2018 European Championships in Berlin, also preceded Leo Köpp, who was five years younger, and thus won the title of German champion at 1 km with a performance of 21: 37: 20 hours. Perhaps still decisive: he remained 37 seconds below the sharp OH limit (1:21:00 h) for 20 km, but he met already in 2019.

"A new motivational wave for training"

Leo Köpp, in second place in the 1:22:04 h, also showed excellent performance. Christopher Linke (1:23:09 h), the fourth from the last World Cup and thus with the best possible outlook to be nominated for the Olympics, had to fight stomach problems as he had several times in the past and thus could not show everything that is in him. Hagen Pohle (1:23:33 h), he had it three weeks after the 16th in Dudince and he still has to fight for the OH limit - perhaps on May XNUMX at the European Championships in walking teams Poděbrady .....

"It was a good performance for those conditions," said federal coach Ron Weigel, who not only coaches the German national team but also takes care of club pedestrians and pedestrians from Potsdam. "Nils Brembach trained well, others knew that. Christopher Linke is a little angry that he failed to win the title. He doesn't like winter, he loves the heat. " "Now we know what we are up to and the race was also a great motivation for the next training session."

Another of the excellent races was completed in the women's 20 km Saskia Feige (SC Potsdam). After the best German performance in the U2019-Bestleistung category and the OH limit (23:1:30 h) in 40 and thus jumping to 11th place in the world, she confirmed entry into the world top solo race in Frankfurt with a performance of 1:31:37 ha her second German title.

"We didn't need to put any pressure on her," Ronald Weigel commented on her performance, as the German champion already has a certain ticket to the Olympics, based on her placement at the World Championships. "It was a very solid performance, completely alone, and not a minute behind the personal record." Saskia Feige may underline: "The form direction Sapporo - where the Olympic walk and marathon races will take place - is set correctly".

In the U23 men's race, young pedestrians from Potsdam, Jakob Johannes Schmidt (1:27:18 h) and Johannes Frenzl (1:29:01 h), gained their first walking experience on the 20 km track. Both of them will be in the U23 category for another two years and thus will also be entitled to start at the U2023 European Championships in 23.

In the U18 juniors, Frederick Weigel, the son of national team coach Ron Weigel, celebrated his first major national success: the 15-year-old won the 10 km with a performance of 46:33 Min. He had a 1,5-minute lead over his nearest opponent, although after the third red warning, another 50 meters before the finish, he received a 60-second penalty. If this 60 sec penalty did not occur, Frederick Weigel would meet the limit at the U18 European Championships - after the first year of training and during the first race !!!!

"It's a start, one has to look where it goes," says his successful father. "The name Weigel can also be a burden, so I don't want to interfere, Frederick has to work on himself and do things himself. Walking is a technical discipline, mistakes have to be worked on." concluded the walking legend Ronald Weigel.