Podebrady Walking 2020 - how did the domestic competitors succeed? 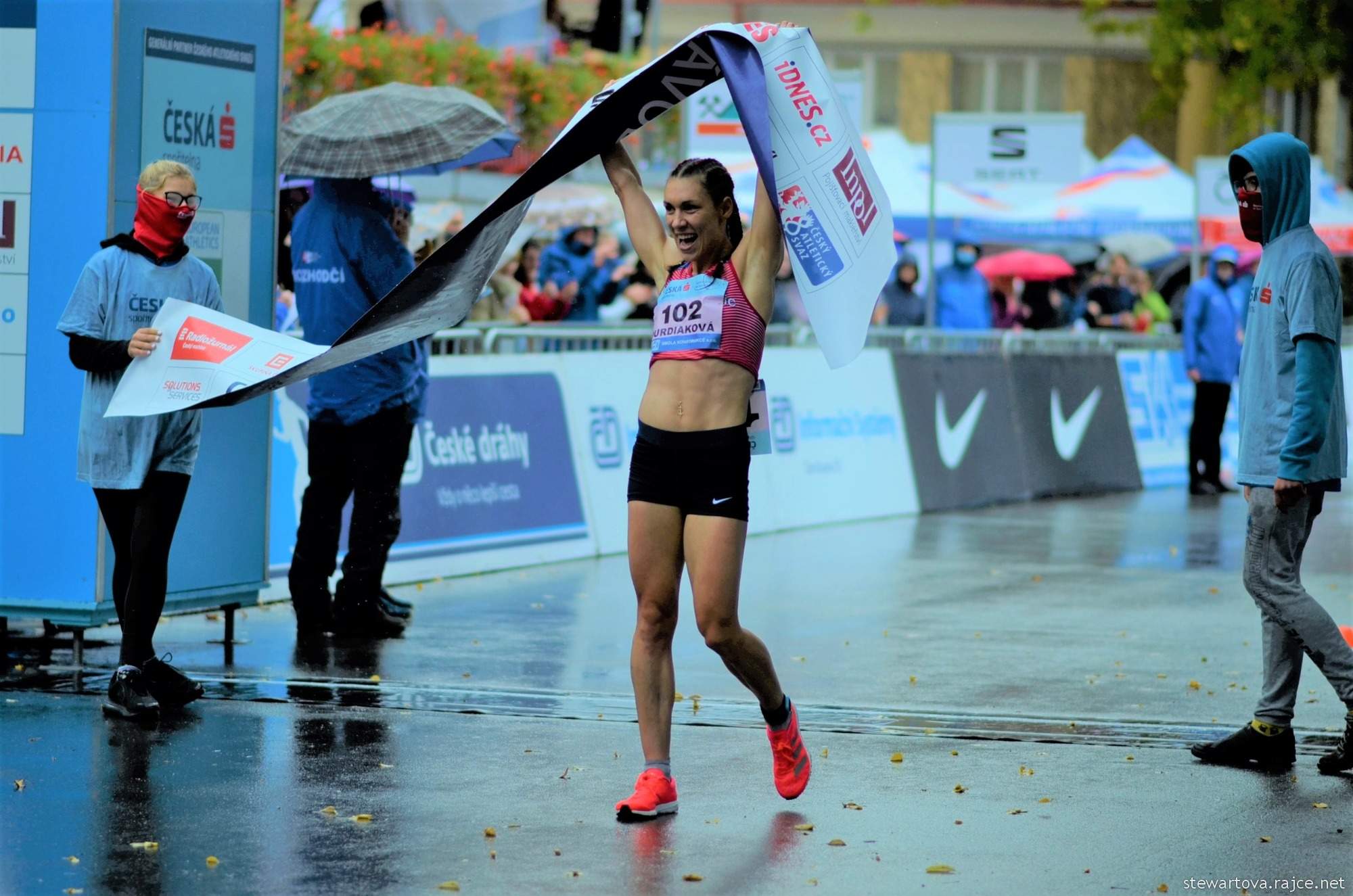 After long delays due to the COVID-19 epidemic, another year of the legendary race on the spa colonnade circuit took place in mid-October in inclement and rainy weather, which partially affected the performance. Foreign participants on the 20 km track, albeit in limited numbers due to difficult travel during the epidemic, delivered world-class performances (the first three women under 1:30 am, the first two men under 1:20 am, the third in 1:20:19 am ).

In the women's 20 km race there was a balanced duel of pedestrians, in which experienced perseverer Tereza Ďurdiaková, AK Olymp Brno, a new face of Czech walking with several months of specialized training with I. Piták, in the last kilometer prepared the second defeat of this year's internationally successful Anežka Drahotová, USK Prague, (1:33:54 hrs - the fifth best time in history - against 1:33:59 hrs). To explain: Drahotová moved from I. Piták to the Australian coach a year ago after many years of cooperation, and in January during the training she spent a promising time in Melbourne on 10 m on the track (000: 44 min); after returning to the Czech Republic in March, however, she was injured and throughout the remaining period she had both health problems and only distance contact with her coach. Her abilities are proven and we can certainly expect world performances from her; rivalry with Ďurdiaková can also help. As expected, the excellent junior Eliška Martínková won the bronze medal at the Czech Championships (34.5:1:42 - eleventh time in history), although she was not completely fit, followed by her teammate from Turnov, junior Jana Zikmundová (39:1:45 - sixteenth time history); both are led by the current federation coach K. Čermáková. Štěpánka Pohlová Kučerová from Hradec Králové (21:1:46 - seventeenth time in history) also recorded a significant improvement, occupying the fourth place, similarly to her coach T. Hlavenka. A personal record in fifth place is the time of veteran Naděžda Dušková, SAK Rumburk (18:1:53), coach M. Dušek; the sixth place in 41:2:02 belongs to the junior Michaela Baklíková from ŠKODA Plzeň, coach J. Malys, who went on such a long track for the first time. Lenka Borovičková, SK Nové Město nad Metují (32:20:2), Lenka Slabáková, AC Moravská Slavia Brno (06:37:2) and Martina Netolická, AC Slovan Liberec (07:34:2 AM). 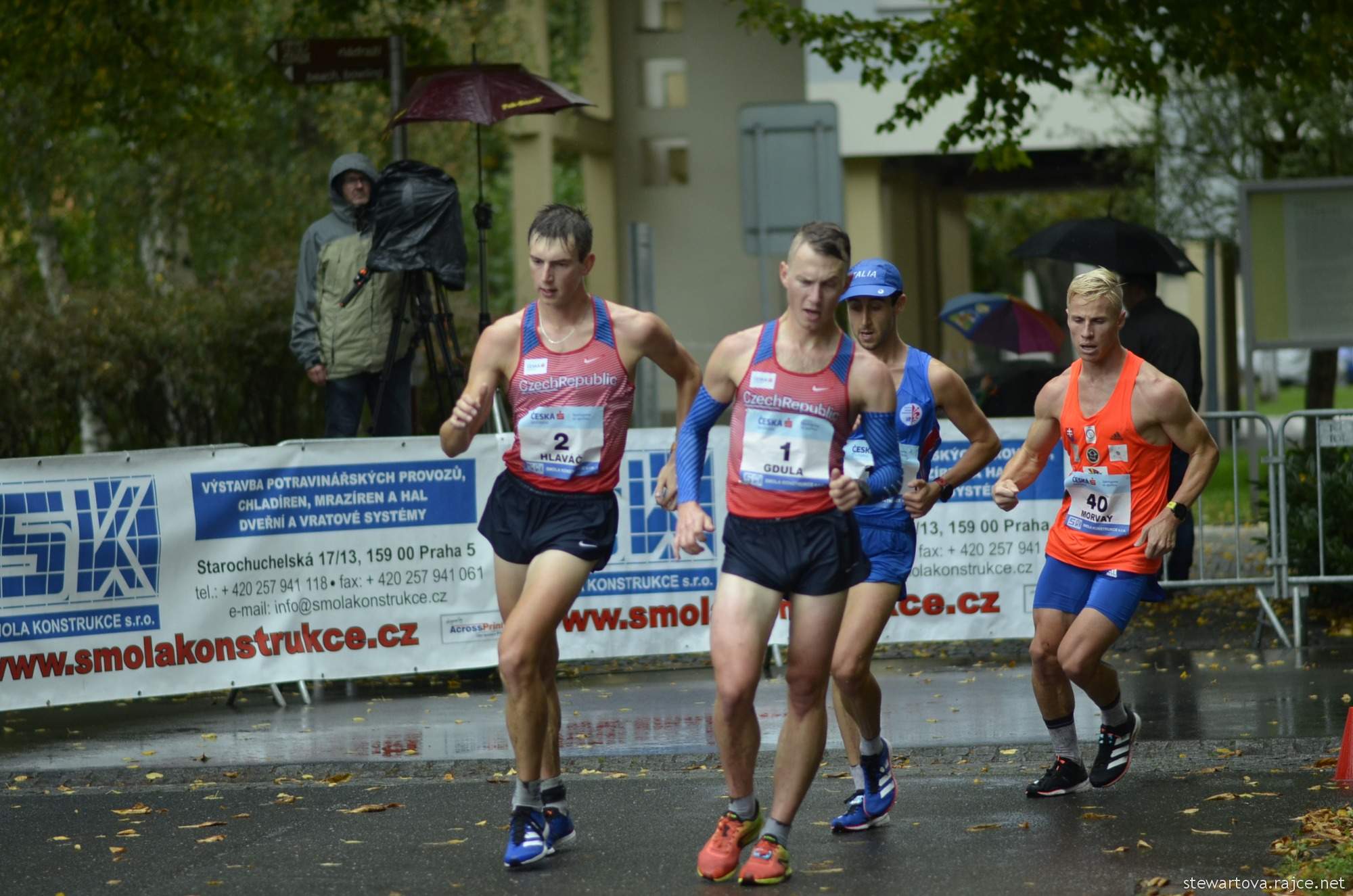 Men's 20 km race only seven domestic pedestrians out of 25 participants took part, and both the great distance of the Czech representatives from the international level and the critical situation in this category were confirmed. Lukáš Gdula, Hvězda Pardubice, coach I. Piták became the Czech champion (17th place - 1:27:07 am) before Vít Hlaváč, AC TEPO Kladno, coach I. Piták, (19th place - 1:28:21 am) ); Gdula's performance was surprising due to his injuries from the June race in Milovice, while Hlaváč, who was more active on the track, lost two minutes in the "penalty zone" for three proposals for exclusion. Martin Nedvídek from Rumburk won the big duel of great veterans for the last 1500 m and won bronze medals from the Czech Championships in front of Brno's Tomáš Hlavenka (1:33:33 vs. 1:33:46); they both train on their own. Rostislav Kolář, SK Hranice, coach P. Brandejský won fifth place at the Czech Championships; he was not at all satisfied with the time 1:39:37 hours after 10 km in 46:33 minutes; the failure was caused by both uncontrollable tactics and muscle problems from heavy cold and rain. Veterans Josef Smola, SMOLA CHUZE Praha and Tomáš Vojtíšek, AC Moravská Slavia Brno, tried, but they were withdrawn from the track for not meeting the 1:25 hour limit for 15 km. Junior race for 10 km he had only four competitors from the Czech Republic at the start and a duel of youth record holder Jaromír Morávek, SMOLA CHUZE Prague, coach I. Piták, this year 43:48 min, with the Slovak representative Ľubomír Kubiš was waiting. However, this did not happen, because Morávek no longer had the same performance as in August and followed Kubiš (42:53 min OR) with a large distance (46:27 min); but it should be noted that his conqueror is two years older and at his age had a personal record of 44:54 min. Adam Zajíček from Porub, coach K. Ketner (48:03 min) and Daniel Balicz, AC Mladá Boleslav, coach J. Prückner (54:20 min) improved in the third and fourth place. Junior at 10 km there was only one, Kristýna Vejšická, Athletics Jižní Město, coach D. Šnajdr, who has been struggling with health problems for a long time (65:44 min). Veterans race at 5 km among the ten pedestrians, the youngest of them was dominated by Filip Hejkrlík, AC Ústí n / L. (24:26 min) in front of Josef Smola, SMOLA CHUZE Prague (26:08 min) and Luďek Šolc, AC Mladá Boleslav (26:26 min); the oldest, Stanislav Marek, Spartak Třebíč, went 37:38 min. Of two veteran at 5 km was faster Miloslava Reinová, AC Rumburk, in 31:25 min before Cora Kruse from Germany (33:13 min). 5 km girls' race had seven participants; multiple medalist from the youth championships Katka Nedvídková, AC Rumburk, coach M. Nedvídek won with a lead (27:17 min); behind her, the order from the Czech Championships in Třinec was repeated - after the third km, Lucie Krinwaldová, AC Mladá Boleslav, coach J. Prückner (28:24 min OR) became independent from the pair and surpassed Alžběta Franklová, AC Sparta Prague, coach V. Molva ( 29:04 min OR). Boys race for 5 km (three at the start) was a clear affair of junior Roman Hanyk, AC Turnov, coach D. Šnajdr (24:04 min OR), in second place was created by OR student Tomáš Endršt, USK Prague, coach P. Brandejský (25:16 min with a reserve) and the talented younger pupil Matěj Piták, Spartak Vrchlabí, came third after a several-month outage (illness, injury) SMOLA KONSTRUKCE, coaches K. Maternová and K. Čermáková (28:15 min). Dr. P. Brandejský