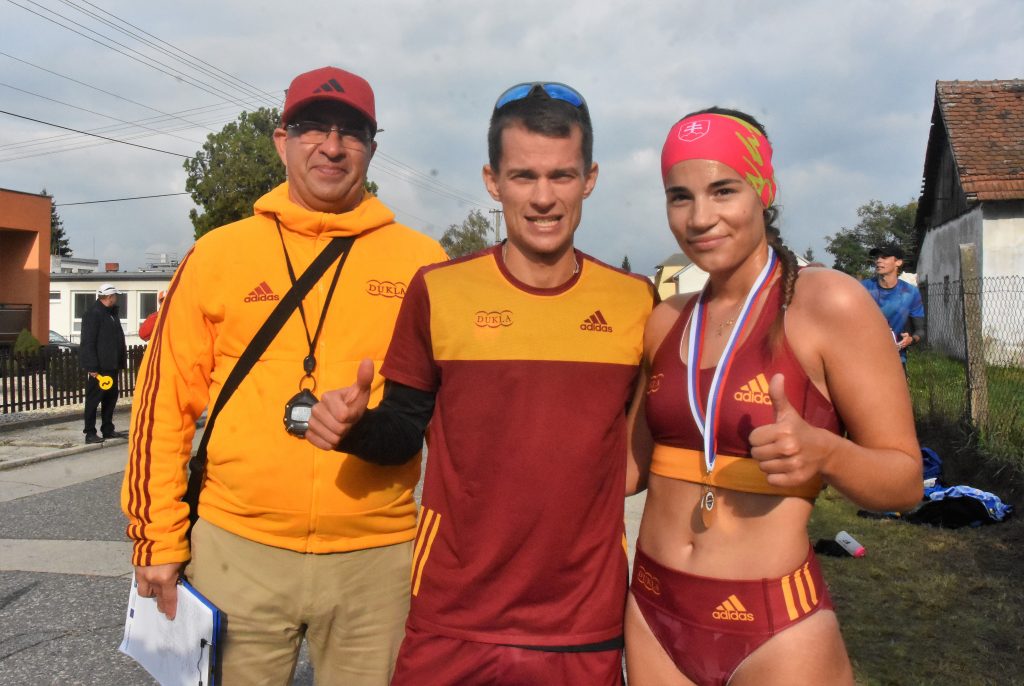 The fifty-first year of the Záhorák Twenty in Walk, the oldest walking race in Slovakia, won in the main category of men in the main 10 km men's race in Borský Mikuláš Miroslav Úradník from Dukla in Banská Bystrica with a time of 42:13 min before the Skalický veteran Milan Rízek (44:28) and another pedestrian Dukla Ľuboš Machník - 53:07

“The plan was to start the first five miles looser, and then move on as you felt. Gradually, I accelerated, but last week's demanding volume training - I walked around 160 km - I felt full in the end, there was a slight fatigue, " The Officer described the Borskomikuláš competition, for which he bounced back from the training camp in Štrbské Pleso and returned to the Tatras immediately after the race.  "It's a pity I went ahead all the time alone. If I had to hang out with, it would be much better. If Dominik Černý was healthy, who encouraged me all the time, and Maťo Tóth would also come, it would definitely be a nice duel. However, the title counts, although it was probably the easiest of the four. I knew that if nothing happened to me, I should come for him. So far, I value the XNUMX years ago the most, as it was my first ever senior. More are being added, to which the joint training with Matej Tóth is also responsible. It gives me a lot and I'm very happy to be able to work with him. "

She won the women's top ten in the absence of the Slovak unit of Maria Katerinka Czakova Klaudia Žarska (Dukla, coach Roman Benčík) in 50:57 min and for the first time she enjoyed the joy of triumph at the senior championship. The other two medal positions belonged to Dubničanka from AK Spartak Hane Burzalova (53:27) to Ema Hachundova from MŠK Borský Mikuláš (53:52).

"The time is not what I like, but I came to win and I did." commented Klaudia Žárska, a foster daughter of the Dubnice walk, at her performance at Záhorácka dvadasatka. "It is not often that I have such an opportunity, because Marika Czaková is our clear unit. I took advantage of being focused. I didn't originally have to start either. My teeth have been bothering me since Friday and I was supposed to be at the dentist today. However, I translated the examination. Even though I felt pain during the race and went on medication, winning the first title was worth it. I thank coach Roman Benčík for taking care of me and preparing me well. ”

They won junior titles Daniel Kovac from ŠK ŠOG Nitra (43:58 - 12th place in Europe in 2020, coach Peter Mečiar), who lagged behind this year's personal record of 11 June in Banská Bystrica by only 27 seconds, and Karin Devaldová from Slavia TU Košice (52:37, coach Henrieta Rusnáková).

The Záhorácka twenties in Borský Mikuláš were originally scheduled to take place on May 23, but due to a coronavirus pandemic, they were moved to October 3. However, it took place three days earlier. Organizers from JC Borský Mikuláš and the village of Borský Mikuláš, headed by the mayor Robert Macekom and the race director Roman Gazárek promptly responded to the tightening of measures in connection with the second wave of the pandemic from 1 October and, as soon as possible, organized the race according to the original plan. Despite the express transfer (it was decided on Monday evening) of the event from Saturday to Wednesday, a very solid participation of pedestrians from all over Slovakia gathered at the "Boards".

The couple Jaroslav and Henrieta Rusnákovci from Košice and their two trustees Karin Devaldová and Stanka Hakulinová also measured the way to the other end of the republic. "In the original term, the girls were not supposed to start at Záhorácka twenties, as the Slovak youth team championships were to be held in Košice on Saturday, and that was a priority for us. So this change came in handy - on Tuesday we decided to go to Borský Mikuláš for lunch. We started the car and here we are, ” said Henrieta Rusnáková, whose trustees won gold and silver in the junior competition.

The vice-champion of Slovakia, 42-year-old Skaličan Milan Rízek, came to Borský Mikuláš directly from work at the Skalica hospital, where he works as a masseur in the rehabilitation department. "I chose half a day off at work. Thanks to the head nurse for allowing me to do this. In the morning I still paid attention to the patients, but in the afternoon I was already fighting for medals at the Boers. I am glad that I was not absent despite the hectic, because I have been starting in Záhorácka dvadka almost regularly since 2005, " claimed a pedestrian fanatic who would not allow his sport: "When walking, I still have a good game at this age and also that the sport fills me. Thanks to him, I will clear my head. "